On 14th Dezember 2022, the Club Fair Play of the Slovak Olympic and Sports Committee (CFP SOSC) presented its yearly awards, including the Jan Popluhar Award, named after the legendary Slovak footballer of the 20th century, which is the highest trophy of SOSC in the field of Fair Play. The ceremony took place in the Exhibition Hall of Vladimír Černušák in the House of Sport in Bratislava, Slovakia.

The Jan Popluhar Award 2022 was awarded to Pavol Blažek, a four-time Olympian in athletics, European champion from 1990 and former world record holder in the 20 km walk, for his lifelong performance in the spirit of fair play.

"This is a great award for me. It might even mean more than my European Championship title. In the walking race, I was prepared for a specific day and for a specific hour, but this award is for a lifetime's work," commented Pavol Blažek.

The CFP SOSC Trophy, which represents the second level of the award, was handed over to three laureates. On behalf of the football player Peter Čögley, this award was accepted by his mother. "For Peter, helping people and being human is a way of life," she said with the award in her hands.

For his long-term performance in the spirit of fair play, the six-time Olympian, four-time Olympic medalist, 10-time world champion and 11-time European champion in speed canoeing, Erik Vlček, received the CFP SOSC Trophy. "To be awarded for long term performance in the spirit of fair play is one of the 'best' awards an athlete can receive. Among my trophies it will certainly be displayed in a prominent place," said Erik Vlček after receiving the Award.

For spreading and promotion of fair play principles the CFP SOSC Trophy was awarded to Dušan Noga. The long-time director of an elementary school and kindergarten and vice-president of the Bratislava Olympic Club is a successful promoter of the Olympic Values.

Since 2018, the Fair Play Club of the Slovak Olympic and Sports Committee has broadened its award categories. It organized a competition entitled “Sport Is a Chance” to recognize the best project which aims to highlight the social and educational function of sports, while at the same time involving former and/or current personalities of the Slovak sports world to inspire and motivate others to introduce positive changes into society. This year’s winner was a project titled Gymnathlon. The main aim of the project is to play sports more accessible to disadvantaged children and at the same time enable them to integrate into society. The project was awarded a voucher for 1,000 euros for the purchase of sporting goods. 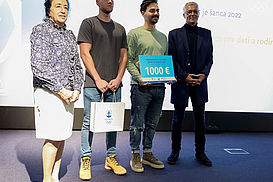 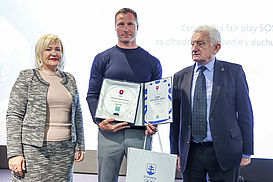