EYOF IN TRIESTE, WITH FAIR PLAY

IN TRIESTE, WITH FAIR PLAY, TODAY IT IS THE OPENING CEREMONY OF THE EYOF WINTER GAMES – FVG 2023

Eyof 2023, the Ceremony will take place at 6pm in Piazza Unità in Trieste with 2300 people. The CNIFP - Friuli Venezia Giulia Committee, EFPM and Panathlon International are already on track for the Fair-Play Awards. Indeed, for this edition, with the involvement of the young "ambassadors" in each participating delegation, the president of the EOC, Spyros Capralos, of the EFPM, Philippe Housiaux, the President of the CNIFP , Euggero Alcanterini and the representatives of the Panathlon committees of Alpe Adria will present the Fair Play awards on Saturday 28 january during the Closing Ceremony in Udine.

Friuli Venezia Giulia is hosting edition breaking all records, with 47 participating nations and a calendar of competitions that also involves sites in Austria (Spittal) and Slovenia (Planica). In fact, there are twelve competition venues, 14 sporting events and 109 competitions which will involve a total of 1,300 young athletes from to 14- to 18-year-olds. Another thousand people are part of the delegations, including technicians and managers.

Piazza dell' Unità d'Italia (Trieste) is invaded by 2300 people for the Opening Ceremony that will be attended by Andrea Abodi, the Italian Minister for Sport and Youth. The program of the ceremony includes the arrival of the torch (the last torchbearer will be a young sportsman from the region) with the lighting of the flame, the official speeches and the opening declaration of the 2023 edition of Eyof.

Two interventions by sportsmen from Friuli Venezia Giulia will briefly describe the beauties of the Region to the delegations. The parade of the participating delegations will be punctuated not only by plays of laser light, but also by the music of a DJ. The Ceremony could also be watched in live streaming on eyof2023.it and EOCTV.org.

In the meantime, the penultimate appointment of the journey for the torch took place in Lignano Sabbiadoro, a non-random stage, given that 18 years ago it had been the seaside resort that hosted the summer edition of the games. It was a sort of passing of the relay between both cities. The sports clubs of the area were present, including the Sci Club of Lignano Sabbiadoro.

The Regional Councillor for Tourism, Sergio Emidio Bini underlined the importance that EYof 2023 has for the whole territory: «The Friuli Venezia Giulia authorities has worked intensely for the success of this event which will contribute to strengthening the visibility of our territory and confirms the region's tradition of hosting major events». The Olympic medalist and world champion of the Paralympic national table tennis team, Giada Rossi, was present in Lignano.

EYOF, launched in 1990, on the initiative of the Association of European Olympic Committees (Eoc) aims to promote the values and ideals embodied in the Olympic Charter, educating and motivating young people - as stated in the presentation of the event - to practice sport and embrace a healthy lifestyle. 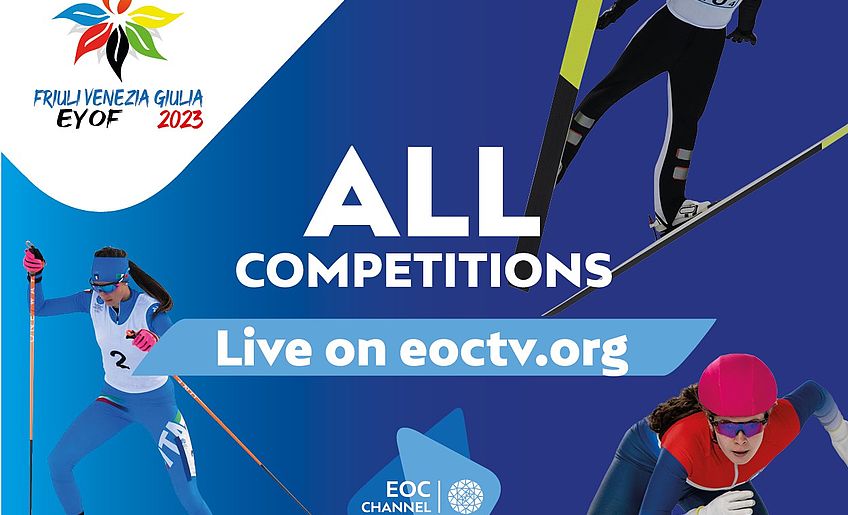